Posted by Lynne (Lily's Quilts) on January 10, 2012
In spite of the fact that I resolved to take on nothing new this year, I have taken on two new commitments in the past week but with good reason.  The first new project is to join Katy's swoon-a-long on Flickr.  Camille Roskelly's Swoon pattern was the big hit of last year and looks set to continue the same way this year with nearly 300 quilters already in Katy's Flickr group.  The quilt is made up of nine large blocks and ends up somewhere around 80" square.

Katy's starter post is here if you are interested in swooning along too.  I had already committed to make a quilt for my French neice and had decided on using my J'adore by Dear Stella fabrics combined with some of the fat quarters which came to me from Eternal Maker as part of their Fat Quarters Club. 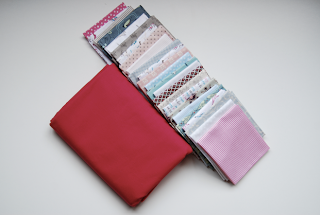 After some deliberation and advice gathered on twitter yesterday, I decided to pair the fabrics with pomegranite.  Snow was too pale, I am bored of sashing with greys, as much as I love them, and suggestions of pale blues and aquas also seemed a little safe.  So I settled on Klona pomegranate which is a bright in-your-face pinky red or redddy pink, a kind of raspberry red.  I placed my order with Alice at Backstitch yesterday and today 4 yards of Klona pomegranate arrived together with a handy Klona swatch card for colour matchings solids with your fabrics. 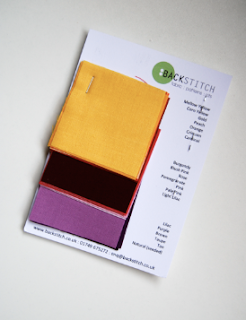 The second is to join a mini quilt swap over on Flickr.  I got the invite to the swap on the same day that a deadine for something I was working on was moved back a few months so it seemed like it came at just the right time.  Called the Fab Little Quilt Swap, I will need to make a mini quilt by the middle of March.  Making mini quilts is a great way to try out new techniques and to make something outside of your usual comfort zone and, since you are making for someone else, you also have to tailor the quilt to their likes and dislikes which is a fun challenge.  Here are some mini quilts I have made in previous Flickr swaps.

Have you accidentally joined any new bees, swaps, quilt-a-longs or inadvertently started any new projects since the start of this year?