Posted by Lynne (Lily's Quilts) on January 28, 2012
I recently joined a quilt swap on Flickr.  Each participant makes a mini quilt (up to 24" square) for a secret partner.  I know who I am making for but don't know who is making for me.  Two of the things my partners likes are bright colours and triangles so I set off down that route.  Firstly, I scribbled out a few sketches to see what looked interesting.  Some HSTs.  Nice but a bit boring.

A storm at sea quilt pattern variation.  Nice but a bit fuddy duddy.

Another storm at sea quilt variation.  Nice but a bit simple.

And then I remembered this quilt which Anita had found on the Clothworks blog and pointed out to me a few months before.  Designed by Beach Garden Quilts, the quilt is made from their fabulous Eagle Harbor Summer quilt pattern, again using storm at sea as the basic quilt pattern but giving it a fresh twist using solids. 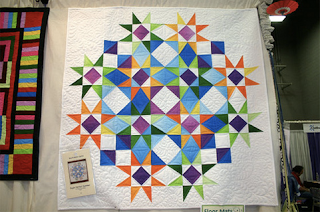 I tracked back to some of the posts I had done on picking palettes in the Dead Simple Quiltalong and found this palette.  Kind of fruity, bright, fresh, citrussy but a little bit pale overall so I wanted to start with this and then add some deeper colours too for contrast. 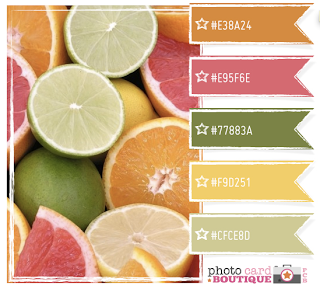 I rummaged around in my Kona Bounty of Basic Boxes and kept pulling FQs, adding and subtracting until I ended up with this mix.  I added a few greys in to tone down the sweetness a teensy bit and decided to use mix the whole lot with Kona snow and pepper as background.

I drew the pattern up on squared paper and then drew up little 2" square paper piecing templates.  If you look at the picture below, you can see that the quilt is made up of squares, HSTs and then the rest of the blocks are made from two templates: the square within a square and the triangle within a square.  All the squares in the quilt below are 2" finished so the quilt will be 24" square.

And I have to say that I am sorely tempted to make a big version of this quilt at some point in the future - 6" squares to make a 72" square quilt, sash up to 80" in shot cottons.  Perhaps in a colour scheme something like Oakshott's Twelve Trees quilt kit below.